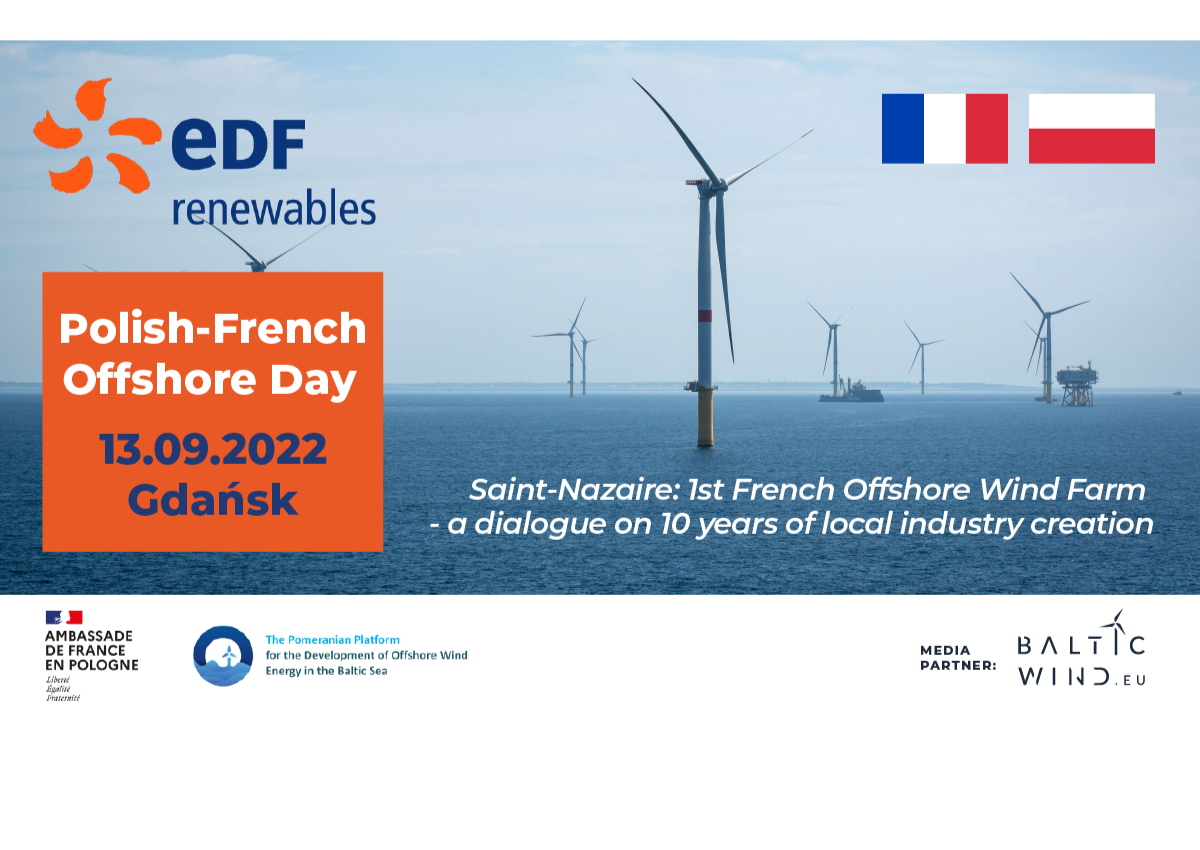 EDF Renewables invites you to a unique event dedicated to offshore wind energy industry: the “Polish-French Offshore Day”, which will take place on September 13th in Gdańsk, under the honorary patronage of the Ambassador of the French Republic to Poland, His Excellency, Mr. Frédéric Billet.

EDF Renewables, one of the largest companies in the world in terms of investments in renewable energy sources and offshore wind energy, plans to take the next step in the Polish market by getting involved in offshore wind development. This year alone, the company has applied for location permits in Poland in 10 out of 11 available areas for the construction of offshore wind farms under the so-called second phase of the offshore program in Poland.

During the Polish-French Offshore Day, EDF Renewables and its key partners will share their local content experience gained over 10 years of local offshore industry creation, focusing on a dialogue on the first French offshore wind farm (Saint-Nazaire, 480 MW) that will be commissioned by the end of this year.

The event will provide an opportunity to learn about the French experience and key success factors in the creation of the Offshore local industry (around 7 000 jobs created during stage one in France), with a particular focus on integrating local companies into the supply chain.

Meeting in Gdansk will be an opportunity to learn about experiences of the key stakeholders involved in the realization of the Saint-Nazaire offshore wind farm, the first such project in France with a capacity of 480 MW. The stakeholders of the project will talk about challenges they faced over the past 10 years at all levels (business, government, society and environment) – and how they are dealing with these challenges in France.

The first part of the day will also include a meeting with the Pomeranian Platform for the Development of Offshore Wind Energy in the Baltic Sea, and presentations for guests on topics such as the European Commission’s activities in the field of wind energy.

EDF Renewables invites to a dialogue

During the event, EDF Renewables together with its key partners will present its approach to the implementation of offshore projects and the key role of building a local supply chain in its success.

Representatives of the EDF Renewables invite Polish entities to a dialogue, answering questions about its procurement rules as well as sharing experiences gained by EDF Renewables and their partners from other markets, particularly the French one, in presentations and direct talks with Polish companies.

Entities interested in cooperation with EDF Renewables will also have the opportunity to meet with representatives of the Procurement Department of EDF Renewables through direct B2B meetings. Dedicated registration form will be launched a few weeks before the event but entities are encouraged to indicate their interest in such meetings in the event registration form below (number of B2B meetings is limited).

Place and Form of the Event

The Polish-French Offshore Day will take place on the 13 September 2022 at the Gdańsk Entrepreneurship Incubator STARTER at ul. Lęborska 3b in Gdańsk, Poland. Detailed agenda will be shared soon.

Support for the organization of the event was provided by the Pomeranian Offshore Platform.

BalticWind.EU will be the media partner of the event.

Please register your participation in the event in person or online – based on that we will inform you about the details.

EDF Renewables is an international leader in renewable energies, with gross installed capacity of 13.6 GW worldwide. Its development is mainly focused on wind and solar photovoltaic power.

EDF Renewables has been operating historically in Europe and North America and is expanding into Asia-Pacific, Latin America, Africa and the Middle East. EDF Renewables develops, builds, operates and maintains renewable energies projects, both for itself and for third parties. EDF Renewables is currently operating seven offshore wind farms and building five additional ones, including one floating demonstration project.

EDF Renewables’ purpose is to contribute to building a net zero energy future with electricity and innovative solutions worldwide. 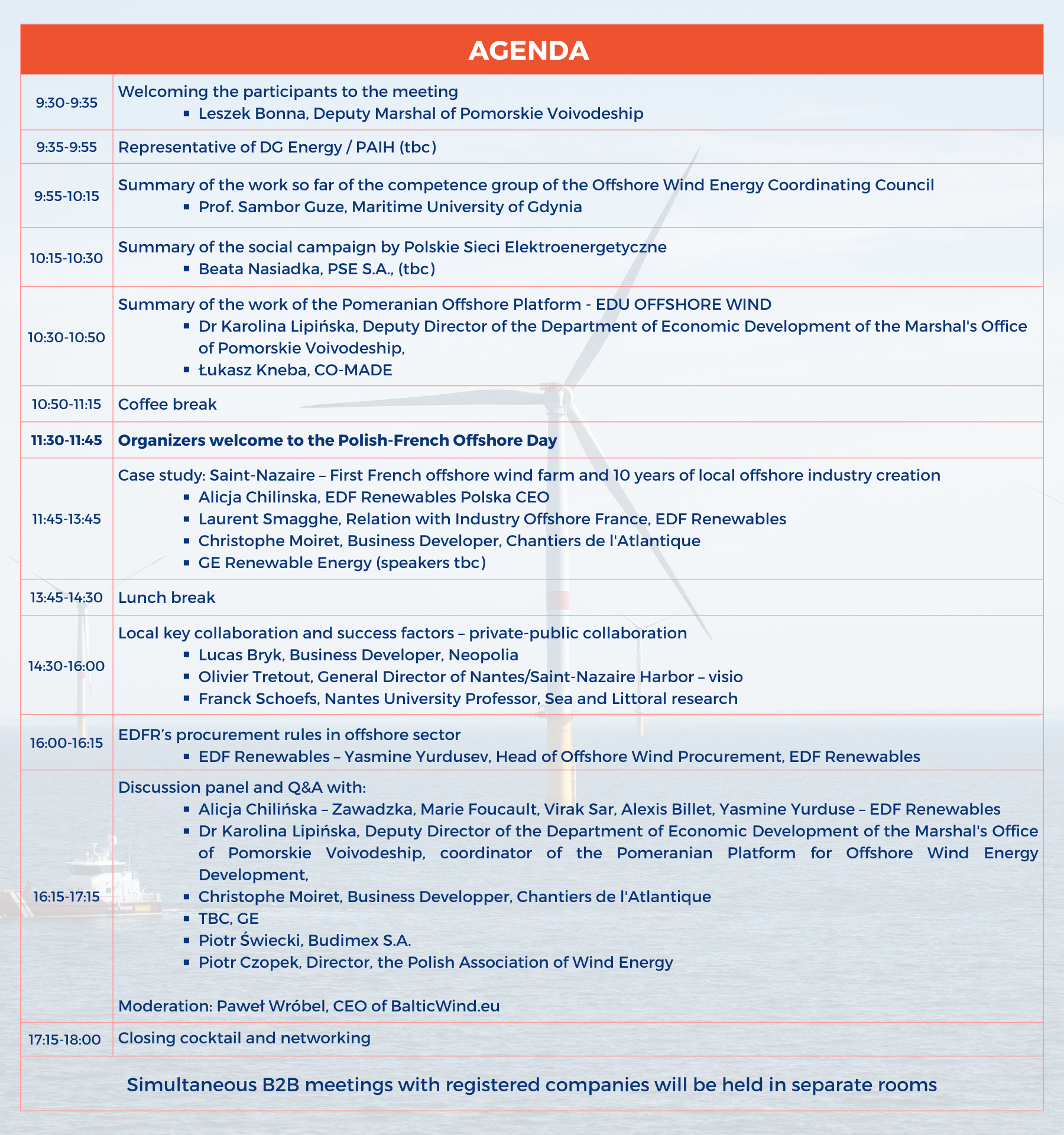 Thank you for your interest in the Polish-French Offshore Day. Unfortunately, the limit of spots for onsite participation has been reached and we can no longer accept your registration. We warmly invite you to register your participation online, we will be broadcasting the entire event live.