Energinet has repaired cable connection between Bornholm and Sweden

Danish electricity system operator Energinet said it took a month to repair the electricity link between Bornholm and Sweden. The damage was more extensive than originally thought. The cable was probably damaged by a ship’s anchor.

According to Energinet, the power connection between Bornholm and Sweden was restarted at 18.03 on Saturday, March 26, and the island can be supplied with electricity from outside again.

One of three cables connecting infrastructure in the town of Hasle in Bornholm to Borreby in Sweden was severed on Saturday, February 26 at 6.17, causing a power cut throughout Bornholm. Energinet immediately sent special units to the site to find the cause and begin repairing the cable. While the submarine cable was broken, Bornholm was supplied with electricity from its own generation sources.

Ship Silja spent the first few days surveying the seabed to determine the location and cause of the fault. Ship Vina then secured the cable, which is normally buried in the seabed, to increase its protection from anchors or trawls, for example. Assister repair vessel then lifted the cable onto the ship’s deck, where the ends of the cable were connected to a spare cable installed between them. 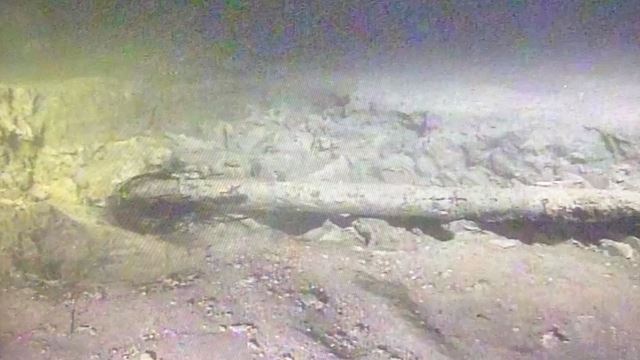 Broken cable connecting Bornholm to Sweden at a depth of 50 metres, photo: Energinet

While repairing the cable, other parts of the cable were also found to have obvious damage from anchors, trawls, etc. The old damage, which had not previously caused problems, was severe enough that these sections of cable also needed to be replaced. Consequently, more cable was needed than the approximately 3.3 km wrapped on the first cable drum. A total of 4.1 km of marine cable was cut and replaced with 4.25 km of new cable – the replacement section has to be longer because the cable failure occurred in water depths of approx. 50 m, and the repair is done on the sea surface

Later investigations showed that the cable was probably pulled through the ship’s anchor. The vessel that was passing over the cable when the failure occurred has been identified and Energinet has initiated insurance proceedings.

If compensation is paid from the ship’s insurance, the sum insured depends on, among other things, the size of the vessel. If the costs exceed the insurance cover compensation, the rest of the costs are paid by Energinet, sp ultimately the Danish electricity consumers.

Smulders and Haizea to cooperate in Baltic Power