During the February 2022 plenary session, Parliament voted on an own-initiative report on the EU offshore renewable energy strategy, as prepared and adopted by the Committee on Industry, Research and Energy. This constitutes Parliament’s response to the Commission’s strategy paper on the subject, adopted in November 2020 as part of the European Green Deal. Finally, the offshore strategy has been adopted. We asked MEP Morten Petersen (Renew, DK) rapporteur in ITRE.

“I am happy, I am proud. After all, the vote in the Parliament is the culmination of lots of work and negotiations. We have achieved a real result for the climate, in practice, the offshore renewables strategy will help to fulfill large CO2 reductions. I am also very satisfied there is a parliamentary majority behind a European strategy creating green growth and jobs across the continent”, said Petersen

What are the key elements of the strategy? Petersen underlined that it probably depends on the eye of the beholder.

‘Some might say, the 800 billion euro we are asking for in public funding, for the expansion of the European electricity grid is the most important element, but to me, the most important thing is speeding up the green transition. We propose time limits on permits, which is rather far-reaching, I think, but it is simply necessary if we are to achieve the climate goals”.

BalticWind.EU asked about the biggest barriers to setting up offshore wind strategy.

“Time, or should I say the lack of time, is the biggest challenge for the green transition”, said Pettersen.

“Consequently, any administrative procedure that takes time away from offshore deployment is a barrier that must be broken down. Across Europe, permitting has proved to take way too much time. It is also crucial that the electricity grid can keep up with the electrification of Europe, and that our internal market for energy gets up and running. The energy transition is both technically and politically difficult, there are many different barriers to point to, and that is also very much what we have done in the offshore strategy”. 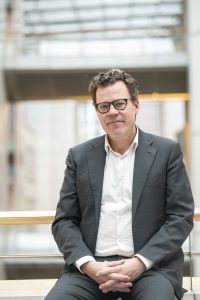 Morten PETERSEN in the EP in Brussels

“Now the strategy needs to get to work, so to speak. The strategy will come into play in various Fit for 55 negotiations, as the European Parliament’s official position. However, many of the strategy’s proposals depend on the Member States picking up the ideas and implementing them, for example in the context of national maritime spatial plans. The commercial part is very much in place already, because there is seemingly no lack of private investors for the development and deployment of offshore renewable energy in Europe. The challenge is mainly administrative, and there is already quite a lot of agreement between the European Parliament and the European Commission on offshore renewables. So the final part lies with the Member States. That’s where the administrative decisions are made, and that’s where the administrative challenge needs to be solved in practice”.