Investors’ spendings put towards offshore wind are comming close to reaching the value of oil&gas investments, and will surpass them in several regions by 2030. Global spending on conventional energy will rise to over $140 billion by 2030. Over the same period of time, the fast-growing offshore wind sector will reach a market value of $87 billion, accounting for 70 percent of growth comparing to the market value of $50 billion in 2021. Moreover, it is estimated that by 2030, the difference between greenfield investments in O&G and offshore wind will amount to only $10 billion. The exact numbers are shown in the graphic below. 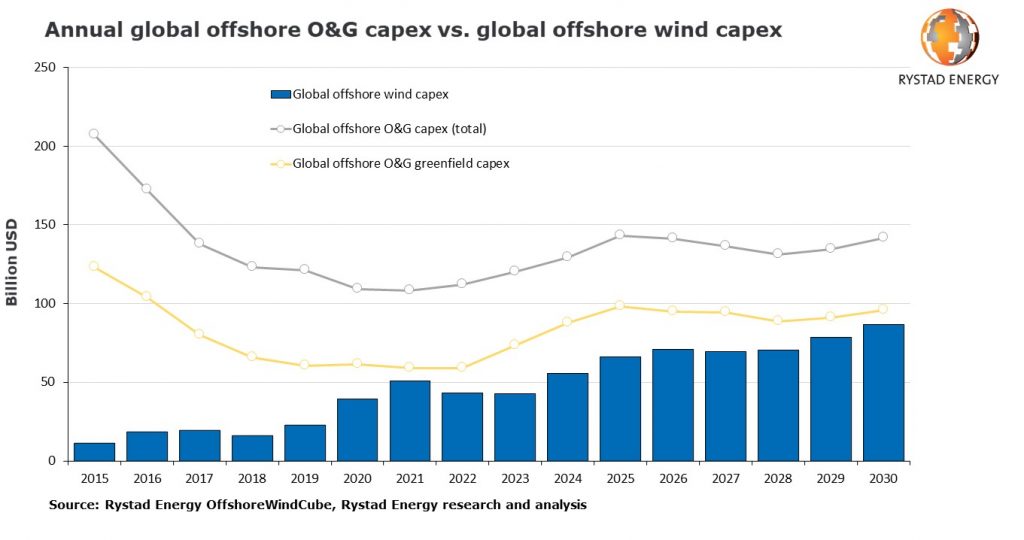 While the global intersection of oil and gas to offshore wind investment is more distant in time, a gradual decline in oil and gas investment and an inevitable transition is expected in countries and regions where offshore wind is a priority. Rystad Energy points out that China and the UK – the two largest countries in terms of operational offshore wind capacity – have already reached the 2017 and 2020 cut-off point respectively.

Europe is expected to be the largest offshore wind region in the world by 2030, with 119 GW of capacity. The continental intersection will occur in 2026

In Europe, investment levels in offshore wind have remained high for some time, making it the most mature offshore wind region in the world with 25.7 GW of operational capacity. As O&G investments decline and mining companies cut capex budgets during the pandemic, offshore wind and O&G capex levels are expected to nearly intersect in 2022. However, with a modest recovery in the O&G sector, as the global economy recovers from the pandemic, coupled with a temporary slowdown in offshore wind investment growth due to project timing, the crossover point is not expected to occur in Europe before 2026.

The UK is now the world’s largest offshore wind industry, with around 10.5 GW of operational capacity. Although investment levels in the O&G and offshore wind sectors have intersected before, the permanent intersection occurred in 2020. With the UK targeting 40 GW of offshore wind capacity by 2030, activity levels are expected to remain high, meaning that the UK offshore wind market will remain larger than the O&G market by 2030.

Denmark has limited offshore O&G activity and was one of the early players in the offshore wind sector. Despite this, it currently ranks only fourth in Europe in terms of operating capacity (2.3 GW) because many of its early wind farms were relatively small. It is not until 2022 that investment in offshore wind is expected to surpass investment in O&G in Denmark. This is due to the country’s current bidding activity and ambitious plans for large energy islands.

The US offshore wind sector will see the fastest growth in investments, albeit from a very low level in 2020. The US has seen a decline in O&G investment levels, with capital expenditure levels expected to fall below $10 billion from 2023. At the same time, the Biden administration has set an ambitious offshore wind target of 30 GW by 2030. Rystad Energy expects the U.S. to fall short of its stated goal, a projection of 21 GW by 2030 would involve a rapid increase in investment to $8-10 billion between 2025 and 2030.

China’s offshore wind industry will grow rapidly by 2030, but investment will begin to decline over time as feed-in tariffs (FITs) are phased out from 2022. Nevertheless, China will become the largest offshore wind market in the world, with 58 GW of installed capacity in 2030.

Rystad Energy’s analysis reads that the offshore wind industry in Asia (excluding China) is still in its infancy, but is expected to see rapid capacity growth within a decade. In the short to medium term perspective, shallow water wind farms in Vietnam and Taiwan are expected to drive investments through 2025. Experts expect Japan and South Korea to contribute to the sector’s growth in the second half of the decade. With declining investment in offshore O&G fields, this region should see a turning point in 2028.