The war in Ukraine, caused by Russia’s attack, has shown how damaging the toxic relationship between Europe and Russia is in the energy sector. The answer is REPowerEU – European Commission’s plan to make Europe independent from Russian fossil fuels by 2030. One of the pillars of action is RES investments. Offshore wind development, including in the Baltic Sea region, can effectively increase Europe’s energy independence. In May 2022, European Commission will provide guidance to national governments on improving the permitting process for RES projects.

Yesterday, President of the European Commission, Ursula von der Leyen, explained that the European Union must become independent from Russian oil, coal, and gas. You cannot rely on an untrustworthy supplier of raw materials who threatens Europe. The sooner the EU moves to renewables and hydrogen combined with greater energy efficiency, the sooner it will be independent, working towards a new energy system.

The set of energy price mitigation actions and measures, developed by the Commission last October, helps Member States protect consumers from the effects of high prices and remains an important benchmark for national measures. The EC provided additional guidance, confirming the possibility of price regulation in exceptional circumstances, the EC announcement read.

The Commission will also assess options for improving the structure of the electricity market, taking into account the final report of the Agency for the Cooperation of Energy Regulators (ACER) and other data on the benefits and drawbacks of alternative pricing mechanisms.

What does REPowerEU plan?

REPowerEU aims to increase the resilience of the EU’s energy system based on diversification of gas supplies through increased LNG transshipment and pipeline imports from non-Russian suppliers, increased production and imports of biomethane and hydrogen, and accelerated reduction of fossil fuel use in homes, buildings, industry, and the energy system through increased energy efficiency, increased RES, electrification, and addressing infrastructure constraints. 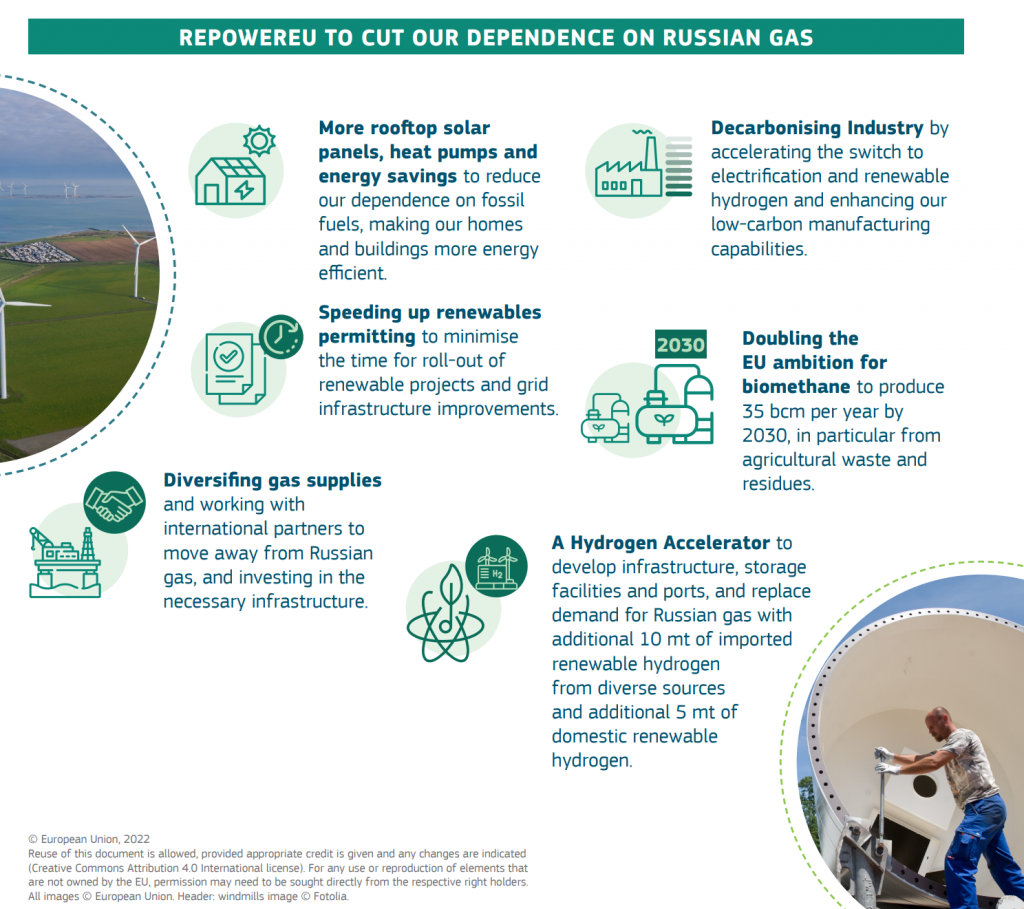 Full implementation of the Commission’s proposals under the Fit-for-55 package would reduce annual fossil gas consumption by 30 percent, equivalent to 100 billion cubic meters by 2030. With the measures in the REPowerEU plan, the EU could gradually reduce its fossil gas consumption by at least 155 billion cubic meters, equivalent to the volume of imports from Russia in 2021.

RES will help with the plans, but there are many barriers

While the plan is ambitious and envisions an acceleration of RES development, several steps must be taken to remove barriers to wind energy development. Urgent investment is needed to develop network infrastructure, including offshore. For many years, the wind industry has pointed to the problem of slow permitting. Therefore, the permitting process needs to be streamlined.

As the European Wind Energy Association Wind Europe notes, the European Union wants the wind energy industry to provide 50% of electricity by 2050. This means expanding onshore wind power from 173 GW to 1,000 GW, and offshore wind power from 16 GW to 300 GW. The Commission suggests that another 30 GW of wind capacity, on top of the 450 GW envisioned in its decarbonization scenarios, could be deployed by the end of 2030.

– Improving permitting is an “urgent issue” for Europe’s energy transition. Lengthy and overly complex permitting procedures are a major bottleneck in wind energy development. The EU is currently building only about half of the new wind farms it needs to build to meet the 40 percent RES target by 2030. In May 2022, the European Commission will provide guidance to national governments on how to improve permitting, WindEurope points out.

WindEurope welcomes the EC’s recognition of the key role of the European wind energy supply chain in securing energy supplies. Wind energy provides 300,000 jobs in 248 factories in Europe and contributes €37 billion to EU GDP every year. Each new turbine installed in Europe generates on average €10 million in economic activity. But Europe is not building enough new capacity. The currently slow development of wind power has left the European wind supply chain in a poor state. Without strong measures to support the European supply chain, there will be no “made in Europe” energy transition, the position statement reads.

It is crucial for countries to engage in the development of international hybrid projects that would accelerate offshore wind development, including in the Baltic Sea. Offshore farms will be a pillar of energy security, but they themselves must be adequately protected, so it is also important to discuss the protection of critical infrastructure developed in the seas, especially when an aggressor attacks an independent state not far from the Baltic Sea region.