Electrification is the most cost-effective way to decarbonise Europe’s economy according to a report from ETIPWind and WindEurope out today. Wind energy will lead the process: the EU sees it being half of Europe’s electricity by 2050. With the right investments in grids and technology, the combined rate of direct and indirect electrification will be 75% of Europe’s energy demand. And with further cost reductions in wind energy, a net-zero energy system will cost no more than our energy system costs today.

ETIPWind (the European Technology and Innovation Platform on Wind) and WindEurope have published a new report that shows that deep decarbonisation of the economy is possible and affordable. A future net-zero system will cost no more as a share of GDP than our energy system costs today: 10.6% of GDP. And in broader societal terms it’ll be significantly cheaper when factoring in the costs of externalities such as air pollution, water consumption and land use – plus the economic impacts of climate change. 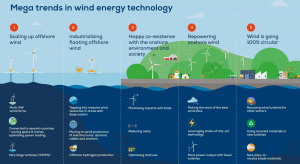 Bo Svoldgaard, Senior Vice President Innovation & Concepts at Vestas, said: “Wind energy will be at the core of the future energy system. It is already the most cost-effective power generation source. With further technology improvements and better permitting procedures wind energy will become the number 1 source of electricity soon after 2025.”

Research and innovation are vital to delivering these cost reductions. The European Union must continue to invest in wind energy research to unlock the five megatrends in wind energy technology: the scaling up of offshore wind; the industrialisation of floating offshore wind; further improvements in the co-existence of wind and the natural environment and other societal interests; the repowering of existing onshore and offshore wind farms; and achieving the full circularity of wind turbines.

The power grid – the backbone of the energy system

The power grid will be the backbone of an energy system dominated by renewables. By 2050 renewable energies will be 81% of electricity. The report shows that a net-zero energy system, largely running on renewable electricity, can remain reliable and resilient. But Europe’s electricity grid needs to be expanded and reinforced – onshore and offshore – as well as optimised.

Europe currently invests €40bn a year on power grids. Annual investments across all voltage levels need to double over the next thirty years to €66-80bn a year. Transmission infrastructure projects are regularly delayed today. Permitting and approval of transmission infrastructure projects must be streamlined, applying among others a sea-basin approach to offshore wind grid planning. 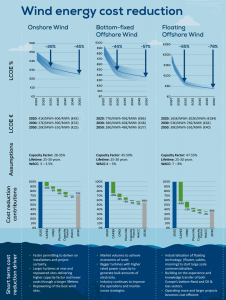 Rasmus Errboe, Senior Vice President, Head of Continental Europe Offshore at Ørsted, said: “Europe needs an energy infrastructure masterplan that can deliver on its decarbonisation ambitions in less than three decades time. We need to double investments in on- and offshore electricity grids and accommodate the build-out of renewable hydrogen. And offshore hybrid power plants will be key to unlocking wind’s full potential.”

A net-zero system needs to provide more flexibility to integrate large shares of renewables. By 2050 wind and solar will be 70% of the EU’s electricity mix. A diverse portfolio of flexibility resources and enabling technologies will ensure that Europe can reliably balance the daily and seasonal variations in renewable generation. Flexibility will be provided by interconnectors, heat pumps, renewable hydrogen, pump storage, battery storage (stationary, vehicle-to-grid), demand-response and dispatchable renewable generation assets. 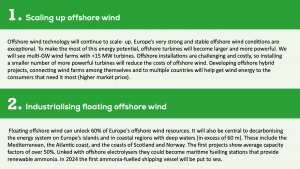