Fingrid has published a plan to develop grid by 2031. Increased forecasts for wind power

Finnish electricity system operator Fingrid has published its Grid Development Plan 2022-2031, which sets out the principles of grid planning, grid development needs and planned investments for the next ten years. The operator is also increasing forecasts for wind power development, but this raises challenges in expanding the north-south transmission grid.

The documentary appeared November 22 on Fingrid’s website (HERE you will find the plan in English). A long-term grid development plan will ensure that the electricity transmission grid and the overall system meet the requirements of the changing environment. The aim of the grid development plan is to ensure that Finland’s goal of carbon neutrality in 2035 is achieved.

As we read on the operator’s website, the development plan is fraught with many uncertainties, particularly with regard to growing energy consumption and the connection of the RES installation to the grid. In addition, there is great uncertainty about the operating environment, including energy shortages and the pace of change in the electricity generation mix. In particular, the amount and geographic location of wind power and the rate of electrification of society have a large impact on the need and timing of Fingrid investments. The operator assures that they are working closely with customers and preparing for possible changes.

Wind power growth projections have been raised significantly from previous plans, the paper says, largely due to tougher climate targets and an increase in electricity consumption estimates. For at least the first half of the 2020s, wind power is expected to be concentrated onshore, but scenario predicts a proliferation of offshore wind, especially in the second half of the 2020s. More than 60 percent of the wind capacity is to be built north of central Finland, a key part of the main grid in terms of capacity. This will increase the demand for transmission capacity on the north-south line. A more even distribution of wind power locations throughout Finland, including southern Finland and the southern parts of eastern Finland below a cross-section of central Finland, would reduce the demand for these investments. 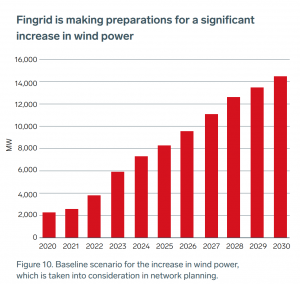 Wind power volumes in Finland are expected to increase by at least 1,000 MW per year from 2020 onwards, leading to a capacity of 10-15 GW by 2030, with a corresponding energy production of 33-53 TWh. If this comes true, wind energy will account for 30-50 percent of Finland’s total electricity consumption.