In Finnish Energy’s annual Energy Attitudes survey, wind power still holds its place as the second most desired form of electricity production in Finland. The survey also strongly highlights Finns’ willingness to increase Finland’s energy self-sufficiency, which brings security in an unstable world situation. A growing number of respondents see electricity as a potential export product and want to limit the amount of electricity imported to Finland.

According to the Energy Attitudes survey, Finns believe in renewable energy, support increasing its use, and hope for support from political decision-making. Wind power is still the second most desired way of generating electricity in Finland, and 82 percent of respondents support its increase. The total support for wind power is 91 percent. According to Finns, the most important goal of political decision-making is to increase Finland’s energy self-sufficiency. They believe in the potential of domestic electricity production and 61 percent consider electricity to be a good export product. 68 percent of respondents would also like to limit the amount of imported electricity. 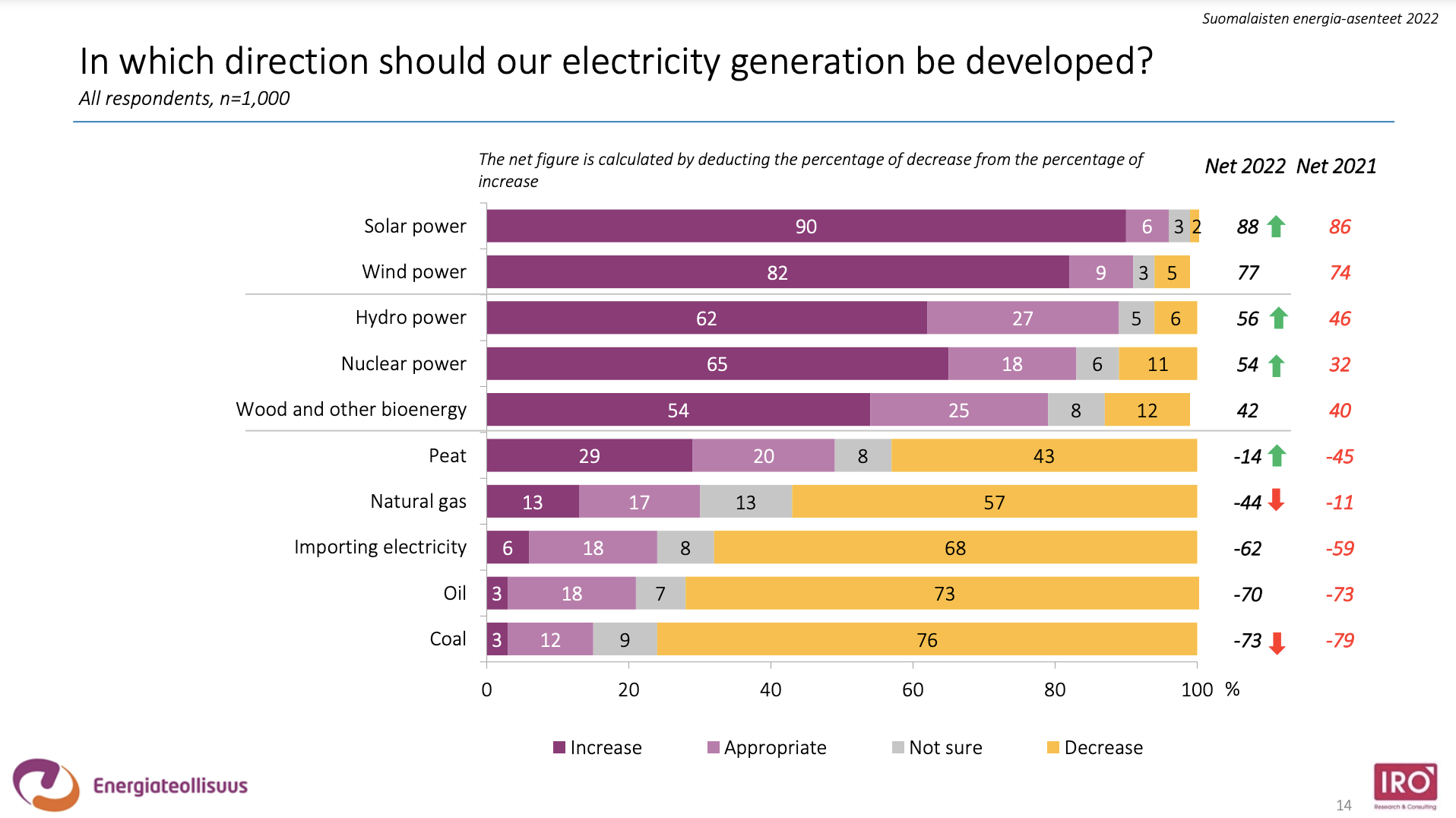 Wind power is the fastest and cheapest way to increase Finland’s renewable energy capacity and increase our country’s energy self-sufficiency. There are many wind power projects in the early planning stages in Finland, but they are especially slowed down by challenges related to permit and planning procedures and appeals.

“So that we can meet the growing demand for wind power, solutions for production bottlenecks should be found. For example, the long processing times for administrative rights are currently slowing down the progress of wind power projects,” says Anni Mikkonen, CEO of the Finnish Wind Power Association.

There are currently more than 52,000 megawatts of onshore wind power planned for Finland. There are 13,000 MW of projects planned for the sea. Although only some of the projects will eventually be realized, the number shows the significant growth potential of Finnish wind power. The amount of wind power capacity under construction is also significant: Between 2022 and 2025, at least more than 4,700 megawatts of new wind power is about to be completed in Finland – Finland’s wind power capacity will therefore double in the next three years.

The results of the Energy Attitudes survey: https://energia.fi/files/7560/Finnish_Energy_Attitudes_2022.pdf

Posted by
Dominika Łysień
Junior Account Manager at BalticWind.EU. A graduate of the University of Groningen in the field of Energy and Climate Law. She completed a BlueBook Traineeship in the Directorate-General for Regional and Urban Policy at the European Commission, where she gained experience in EU funds and energy policy.