PWEA: Poland’s potential in the Baltic is 33 GW

Poland’s offshore wind potential is 33 GW, according to estimates from the Offshore Wind Poland conference. The new PWEA report also indicates 20 new areas in the Polish part of the Baltic Sea, including 18 in the exclusive economic zone and two in the territorial sea. If the Baltic’s total potential is exploited, offshore wind power could meet as much as 57% of Poland’s total electricity demand, and local content could reach 65%, which undoubtedly represents an opportunity for the Polish economy.

Electricity from the first Polish wind farm in the Baltic Sea will flow as early as 2026. There has not yet been such a dynamically developing renewable energy technology in Poland, or even in the world. In the Polish part of the Baltic Sea, preparatory work for the construction of first wind farms is currently underway, as well as administrative procedures, as a result of which further project permits will be granted for the so-called Phase II development projects. The great interest in this sector clearly indicates that offshore wind energy can become a strategic element in building Poland’s energy security and independence.

This year’s Offshore Wind Poland Conference saw the premiere of the report “Offshore Wind Energy Potential in Poland”, prepared on behalf of PWEA by the UMG Maritime Institute, Ramboll and KP Consulting. The publication clearly indicates that by using the total estimated potential of the Polish part of the Baltic Sea, offshore wind power could meet up to 57% of Poland’s total electricity demand by 2040.

Polish offshore areas are currently developing projects with a total capacity of about 8.4 GW, including 5.9 GW from so-called Phase I development projects and 2.5 GW from so-called Phase II development projects. Meanwhile, a detailed analysis of values determining the achievable level of installed capacity and energy production in Poland indicates that the potential of OWF is 33 GW, with an expected average annual energy production of 130 TWh. 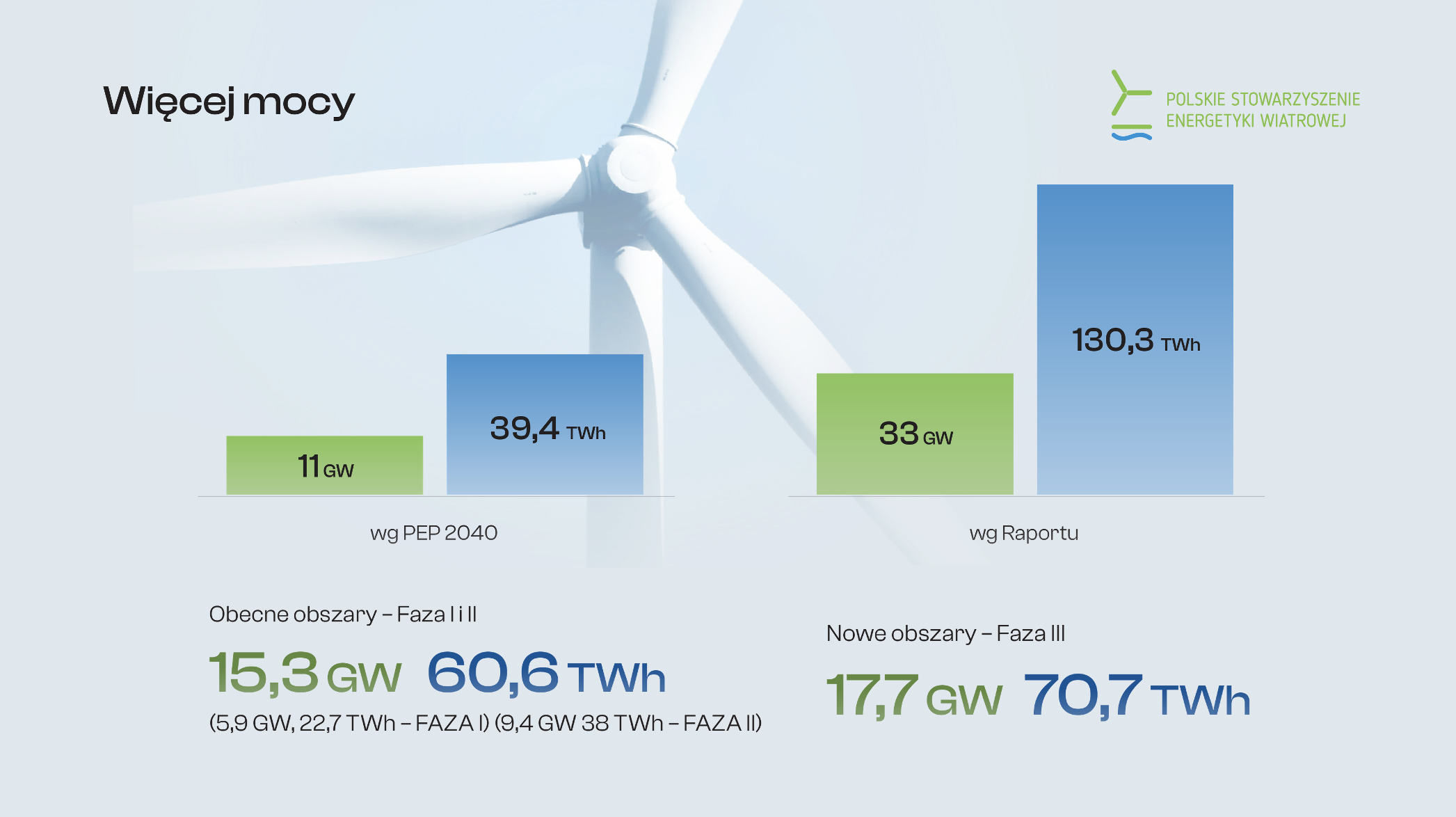 As part of the work on the Report, 20 new areas, 2171.5 km2 in total, were identified, including 18 in the exclusive economic zone and 2 in the territorial sea, which have the potential to be used for OWE development. The potential of these areas is 17.7 GW, with an estimated energy production of 70.7 TWh.

“Taking into account the scale of planned investments in offshore wind farms, Poland has a chance to become one of the largest offshore centers in Europe. The great interest in the Polish market clearly indicates that offshore wind energy can become a strategic element in building Poland’s energy security and independence. Full utilization of the productivity of Polish service providers will mean that the local supply chain for offshore farms can reach up to 65%, which is undoubtedly an opportunity for the Polish economy”, stresses Janusz Gajowiecki, President of the Board, Polish Wind Energy Association.

The realization of the projected potential of OWE will create and sustain thousands of innovative, well-paid jobs. Investments in the Baltic Sea with a capacity of 33 GW are estimated to generate more than 100,000 jobs and PLN 178 billion in gross value added during the development phase and PLN 46 billion annually during the operational phase (based on EY for PWEA, 2019).

“The implementation of the areas identified in the Report (Phase III) into the Spatial development plan for the Polish maritime areas in the scale 1:200,000 (PZPPOM) will require a discussion of the shape of current legislation and a revision of current strategic documents as soon as possible. It will be necessary to update PEP2040, to amend the Offshore Act with regard to additional auction volumes, and to amend the Polish Maritime Spatial Plan adopted in 2021. Simplification of administrative procedures, primarily with regard to the issuance of permits, is also a desirable change” , lists representative of the Maritime Institute.

In addition to changing regulations, an important issue for the dynamic development of offshore is the removal of a number of infrastructural and administrative barriers. The main challenge is the construction and modernization of the transmission infrastructure necessary to connect wind farms in the Baltic Sea. Poland also needs to strengthen the capacity of interconnections with the Baltic Sea countries. Another barrier is the lengthy and complicated procedures for granting decisions and permits for erecting installations.

The lack of infrastructure investment for the construction of installation and service ports generates additional costs for project implementation.

Offshore wind farms are the best available large-scale RES technology to reduce emissions and help Poland meet European climate goals – assuming an annual production of 130 TWh, the decrease in CO2 emissions could be as high as approx. 102 million tons per year. OWFs can be part of a balanced energy mix in Poland to support decarbonization and reduce dependence on fossil fuel supplies. It is also worth noting that without offshore wind farms, Poland will not develop ambitious hydrogen projects related to technology for green hydrogen production.

“Despite the many challenges, offshore investment in Poland today is the raison d’etre. As a first step, strategic documents and permitting issues must be optimized so that the first Polish wind farms in the Baltic can be efficiently and effectively built. The dynamics of change in the markets shows that urgent changes are needed, and I firmly believe that the Offshore Wind Poland conference helped set convergent goals for the entire offshore industry,” pointed out Janusz Gajowiecki, president of PWEA.

Posted by
Dominika Łysień
Junior Account Manager at BalticWind.EU. A graduate of the University of Groningen in the field of Energy and Climate Law. She completed a BlueBook Traineeship in the Directorate-General for Regional and Urban Policy at the European Commission, where she gained experience in EU funds and energy policy.