One of the leading component manufacturers in the offshore wind sector, Siemens Gamesa, has published a white paper entitled “Unlocking European Energy Security”. The authors of the publication argue that the development of the hydrogen economy will not be possible without rapid implementation of RES. Green hydrogen is the key to unlocking energy security in Europe. Offshore wind energy will play one of the key roles.

In just the past three months, the importance and urgency for countries to protect and secure their energy supplies has increased dramatically with the outbreak of Russian war in Ukraine. Geopolitical events have brought energy security to the forefront of European governments’ concerns, both in terms of ensuring independent supply and guaranteeing predictable prices for consumers.

Industries where electrification is difficult or impossible, but which want to remain profitable, can decarbonize through green hydrogen investment and collaboration.

Siemens Gamesa argues that in the years leading up to the EU’s 2050 climate neutrality target, RES and green hydrogen will be crucial.

“We cannot allow the current crisis to sidetrack the climate issue. It is imperative that the entire RES ecosystem agrees on the need to reduce the demand for fossil fuels. For green hydrogen to achieve scale, and thus competitiveness, it also needs a radical change in the scale and pace of RES deployment”, comments Jochen Eickholt, CEO of Siemens Gamesa.

The development of green hydrogen in conjunction with wind power makes particular sense as it lowers the costs. 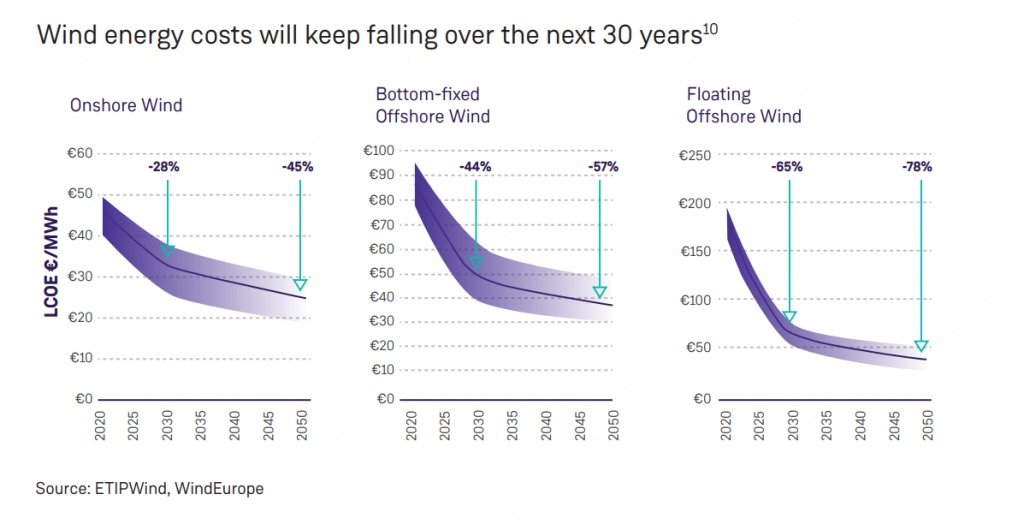 Globally, the first projects are emerging, albeit in relatively small numbers. Siemens Gamesa gave some examples of projects being developed in Europe. The first is Siemens Gamesa’s pioneering Brande Hydrogen demonstration project in Denmark. The green hydrogen produced is used to power some of Copenhagen’s cabs.

The AquaVentus initiative, which promotes the production of hydrogen from RES off the coast of Germany, is one of the most ambitious, and the project is supported by more than 80 companies, research institutes and organizations. By 2035, the AquaVentus initiative aims to produce green hydrogen with offshore wind power in electrolyzers with a total capacity of 10 GW. The electrolyzers will be capable of producing 1 million metric tons of green hydrogen per year. This initiative alone would provide enough energy to decarbonize half of Germany’s current steel production.

Siemens Gamesa, Siemens Energy and RWE, among others, are collaborating on part of the AquaPrimus2 project – a decentralized offshore hydrogen power plant next to Heligoland Island. Siemens Energy is developing an electrolyzer that will be the first of its kind to produce green hydrogen at sea, powered by offshore farms.

Meanwhile, Siemens Gamesa is adapting its existing 14 MW marine turbine for direct offshore hydrogen production and optimising the output and efficiency of an electrolyzer located nearby.

Siemens Gamesa indicates in the recommendations that countries should support innovations in data and analytics, repowering, energy storage, distribution and floating wind farms.