The Danish Energy Agency has announced that it has launched a public consultation with the municipality of Hvidovre on the environmental impact assessment (EIA) for the Aflandshage wind farm. Responses must be submitted by 20 February, 2022.

Citizens, organisations, authorities and others who may be affected by the offshore wind farm now have the opportunity to comment on the environmental impact report. HOFOR began its analytical work in 2011. In 2019, the investor received permission from the Danish Energy Agency to investigate whether the wind farm could be built at the chosen location.

Feasibility studies are conducted by professional consulting firms and include studies of the impact of wind turbines on the environment, wildlife, fisheries, boating, air traffic, landscape, and other relevant social and business interests. 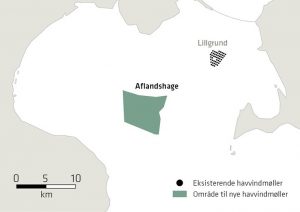 A virtual informational meeting on the project will be held on 12 January, 2022. The project meeting will be held with the participation of the Danish Energy Agency, Hvidovre Municipality and the project contractor HOFOR.

HOFOR Vind wants to install between 26 and 45 offshore wind turbines up to 220 m high, with a total installed capacity of up to 300 MW, located in the Øresund area south of Aflandshage. The area of the wind farm covers a total marine area of approx. 42 km2 and is over 8 kilometres from the coast. The location of the wind farm was selected after careful consideration, taking into account, among other things distance from the coast, nearby Natura 2000 sites, ship traffic in the Sound and air traffic at the nearby airport.

The offshore wind farm is expected to be connected to the grid from the existing 132 kV Energinet substation at Avedøreværket via a new 33 or 66 kV/132 kV transformer substation.

Aflandshage can provide large amounts of CO2-neutral electricity, roughly equivalent to the electricity consumption of about 300,000 households in the Øresund region.