On Thursday 14 April, Elia Group teams welcomed the Deputy Prime Minister and Minister of the Economy and Employment, Pierre-Yves Dermagne, to the construction site of the Arcadis Ost platform in Aalborg, Denmark.

This platform is being jointly built by 50Hertz (Elia Group) and Parkwind; from 2023 onwards, it will support the optimal integration of electricity produced by the Arcadis Ost Baltic Sea wind farm into the electricity grid.

Arcadis Ost is an offshore wind farm in the Baltic Sea which is located 19 km off the coast of Germany. Its wind turbines will produce 247 MW of offshore wind and generate enough green energy to power about 290,000 homes. The wind farm is expected to be operational in the first quarter of 2023. 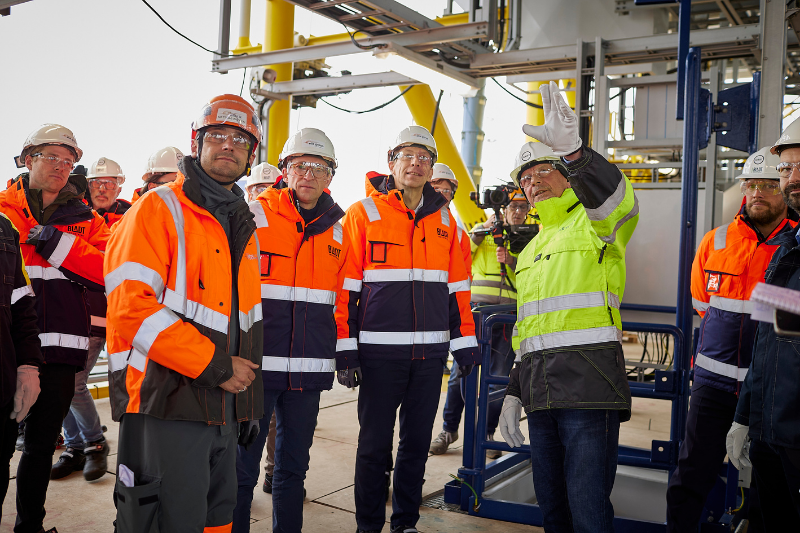 The new platform, which is also called Arcadis Ost and is close to being completed, will enable the safe and efficient aggregation of energy generated at sea. It will transform the energy produced by the wind farm from 33 kV into 220 kV and will then transport it to shore via a subsea cable that will be connected to the 50Hertz high-voltage substation in Lubmin. The platform will be 35 metres long and 23 metres wide. It will be 26 metres above sea level, due to one of the largest monopiles in the world. Once the platform has been built (before the end of this year), its upper part will be transported by boat and installed at sea.

For over 15 years, Belgium has been one of several world leaders in the development of offshore electricity generation. Elia Group and Parkwind have both developed extensive expertise in the area, leading them to develop increasingly innovative projects both within Belgium and outside of it. The CEOs of both companies and a delegation of journalists accompanied the Minister during his visit on Thursday. The latter followed a visit that a German delegation had made to the site the day before.