Preparation for the offshore wind in the Port of Gdynia

The Polish Offshore Wind Sector Deal signed on 15 September 2021 is another milestone in the development of this sector in Poland, next to the Act on the Promotion of Electricity Generation in Offshore Wind Farms of December 2020. This article is part of a series of comments on the main challenges to be met in order to make the plans contained in the sector deal a reality. It has been published in the Quarterly Country Report – Poland Q3 2021.

A long awaited resolution of the Polish Government indicated the Port of Gdynia as a future installation port for the OWF projects, that are planned to be built in the Polish exclusive economic zone of the Baltic Sea. For the Port of Gdynia Authority – as a body responsible for the management of the Gdynia’s port, that means a scope of undertakings, that have to be done and PGA already started the arrangements. The development plans of the port, related to the offshore wind, are planned in such a way that they meet the schedules and requirements of the wind farm developers.

Progress, that have been made in recent years in the scope of the wind turbines gives the opportunity to use the wind energy in much more efficient way, particularly at sea. In the next 3 to 4 years, turbines installed on the Baltic Sea will be 15 MW of generated electrical power and of 300 m of the rotor diameter. Increased size of the tower elements means new challenges for the supply chain of the project – especially for the ships and ports.

To accomplish this task – prepare an OW installation terminal, PGA plans to work simultaneously in two ways. This is necessary to meet the schedules and technical requirements of the OWF developers. Installation terminals consist of specific infrastructure, which aims at the most effective storage, pre-assembly and loading of the components of the wind towers. Taking into account the expectations of the Polish installation terminal, PGA prepares a Temporary Installation Terminal, which will service OWF developers in the very first stage of the projects grouped within the first phase of the Polish offshore wind plan. Temporary terminal will be located in the westernmost part of the port.

Effective realization of the role of the installation port is possible – taking a look at the other such ports in the Western Europe like Mukran or Esbjerg, only in the outer part of the port in the close vicinity to the open waters, what is very important to shorten the time, that jack-up vessels spend in the port. Quays and storage yards have to ensure the proper dimensions and load capacity. High intensity of the work on the Polish terminal is foreseen, as 5 different developers prepares themselves for the construction works at the same or in a similar time.

At the beginning of the of the 2021, PGA modified its development plans to fit them for the new role of the Port of Gdynia. The final solution – the installation terminal on the outer pier of the Port of Gdynia is an planned all-new infrastructure, which will meet, and even exceed the needs. More than 30 hectares of the storage yards (and another 30 of the reserve and further development), two loading zones for JUV, high- end parameters of the quays, yards and the sea bed, ro-ro ramp – those will be ensured by the new offshore wind terminal on the outer pier in Gdynia.

The outer offshore wind terminal is included in the National Recovery Plan (a Polish instrument of the European post-covid19 economic support), which awaits for the approval by the European Commission. Moreover, to prepare a new water area of the port, PGA prepares the projects of the new breakwaters, which are necessary to make the new terminal operational. Simultaneously, other works are being done to optimize the schedule of the OWF terminal project. PGA works to obtain the administrative decisions and consents, that are required by the force of law to start the construction of the infrastructural project.

Without a dedicated offshore wind terminal, it will be impossible to gain a satisfactory (for the governors, society and economy) level of the Polish local content within the supply chain of the OWF projects. If the outer terminal in Gdynia will not be built, the advantages for the region and country, both in the economic and social matter, will not be as wide as desirable they are. PGA makes efforts to make the installation terminal a catalyst of the beneficial processes related to such a big investments, like the terminal itself, but most of all – the offshore wind farms. 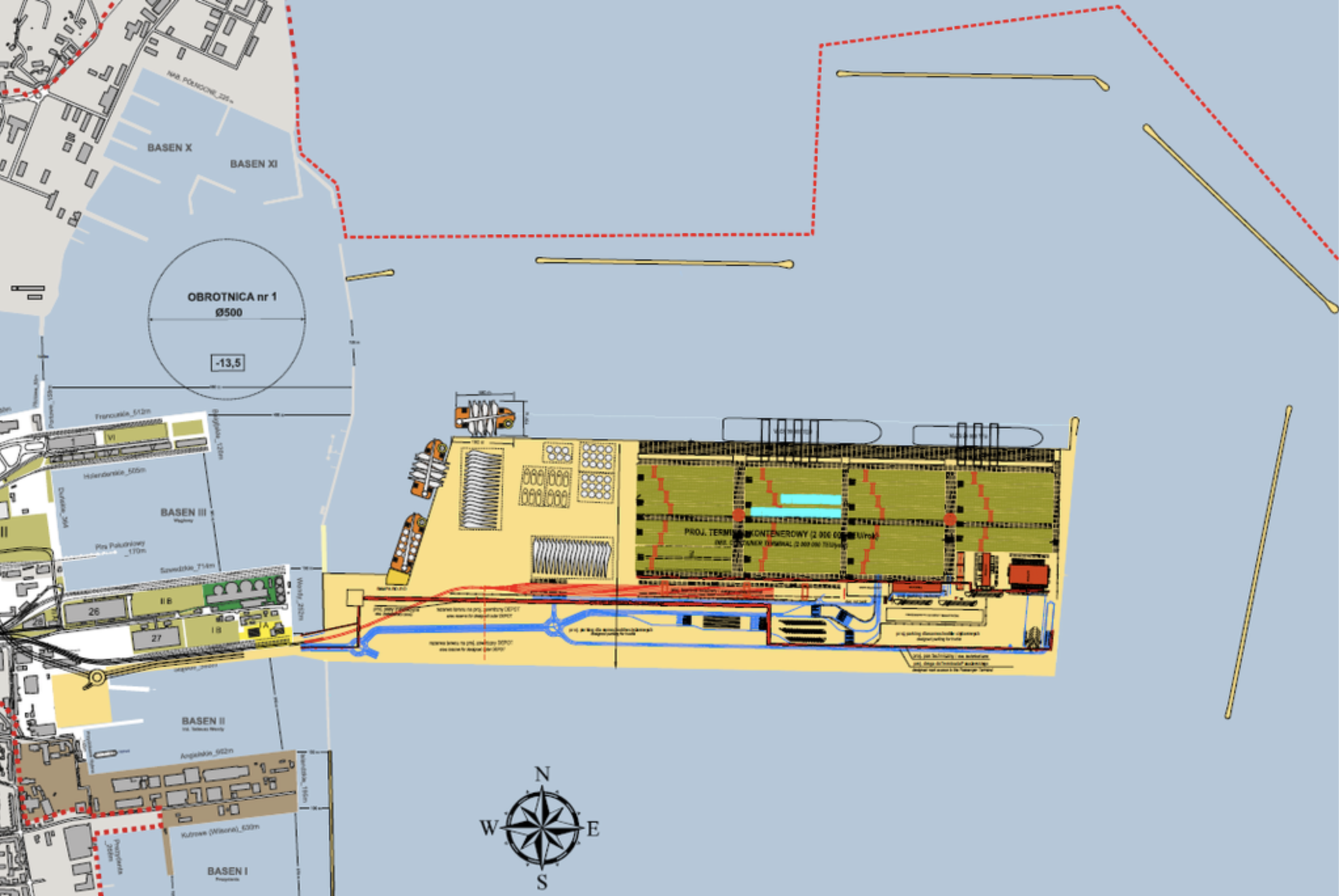