Danish energy islands are set to be one of the landmark projects in Europe. One of them will be built in the Baltic Sea. Ultimately, the infrastructure project will be connected to offshore farms of up to 2 GW. Danish operator Energinet has been ordered by the government to extend its current feasibility studies for plans covering 3 GW of capacity. This has to do with problems at the Hesselø offshore wind farm project, for which alternative sites are being sought.

According to the Danish climate agreement of 22 June 2020, two energy islands are to be built over the next decade. The first will be built in the North Sea and will take the structure of an artificial island. It will be integrated with offshore wind installations of 3 GW, in the long term 10 GW. The second island will be built in Bornholm and will also be connected to offshore wind farms, but with a capacity of 2 GW.

The offshore wind farms around Bornholm will be located within 20 km of the coast. In November 2020, the Danish Minister of Climate, Energy and Supply instructed the operator Energinet to prepare feasibility studies for an energy island with a 2 GW option in offshore farms. The permit was granted on 22 June 2021. These areas are already being explored.

The energy island of Bornholm will take in more power

Energinet said it has been instructed by the government to extend the feasibility studies currently underway for the Bornholm energy island. On 14 October 2021, the Minister of Climate, Energy and Supply issued a new regulation on the matter. A larger area within the island’s range will be tentatively surveyed. The waters around Bornholm could provide an alternative to the Hesselø offshore wind farm if it cannot be developed around Zealand.

We reported on BalticWind.EU that the Hesselø offshore wind farm is one of the wind installations that will be built under the 2018 energy agreement. In said agreement, it was decided to build three new large-scale offshore farms of at least 800 MW capacity by 2030. One of these is the Hesselø power plant, which is originally planned to be built 30 km north of Zealand and about 20 km from Hesselø Island. According to the initial timetable, the farm will be built in 2027 and the Danish operator has therefore tentatively started offshore surveys. The tender process for the farm began in June 2021 and was halted after information from seabed surveys – it emerged that soft clay ground formations were present in much of the area where construction was planned. If the research is confirmed, the farm will have to be built elsewhere. One of the alternatives is the Baltic Sea.

As we read on the Energinet website, the extended feasibility studies now cover the entire orange area marked on the map below. In 2020, it was agreed that offshore wind farms around Bornholm should be located 20 km off the coast. A prerequisite for increasing the share of offshore wind energy on the energy island of Bornholm is to move the project’s coverage boundary. 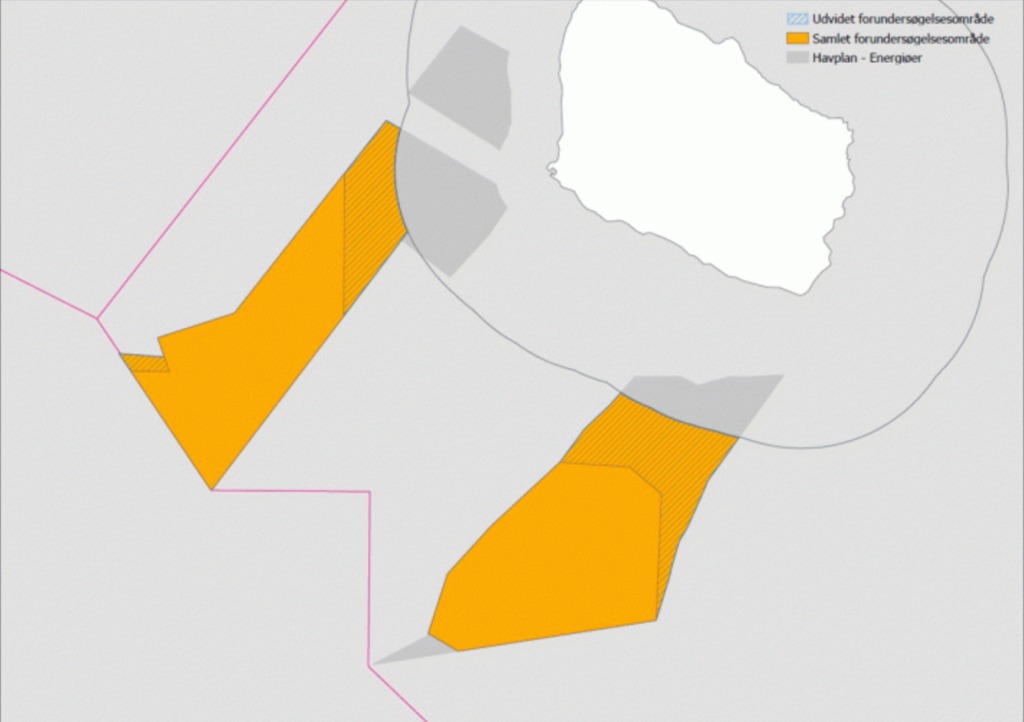 “The offshore area around Bornholm could be important if a political decision is made to increase wind power before 2030”, Energinet points out. The government’s proposal only allows for initial screening of areas, and the use of expanded areas will require a new policy decision.