The government has decided on Sweden’s first offshore plans and has tasked the Swedish Energy Agency with designating, together with other authorities, new offshore areas for electricity generation. The offshore plans enable faster deployment of offshore wind energy in Swedish waters to meet the increased demand for electricity resulting from the green industrial revolution.

– It is an important step for Sweden to lead the climate transition and create green jobs for the future. Today’s industry is calling for offshore wind. We are now accelerating offshore wind development by identifying a number of suitable areas far offshore. At the same time, we are instructing the Swedish Energy Agency to propose even more areas, explained the Minister for Climate and Environment, Annika Strandhäll, at the conference.

Sweden currently consumes about 140 TWh of electricity per year. Adopted offshore plans will allow 20-30 TWh of wind power to expand faster. At the same time, the Swedish Energy Agency will be tasked with working with other relevant authorities to identify areas suitable for producing an additional 90 TWh of electricity in marine areas. Based on the findings of the Swedish Energy Agency, Swedish Agency for Marine and Water Management will propose changes to marine plans. 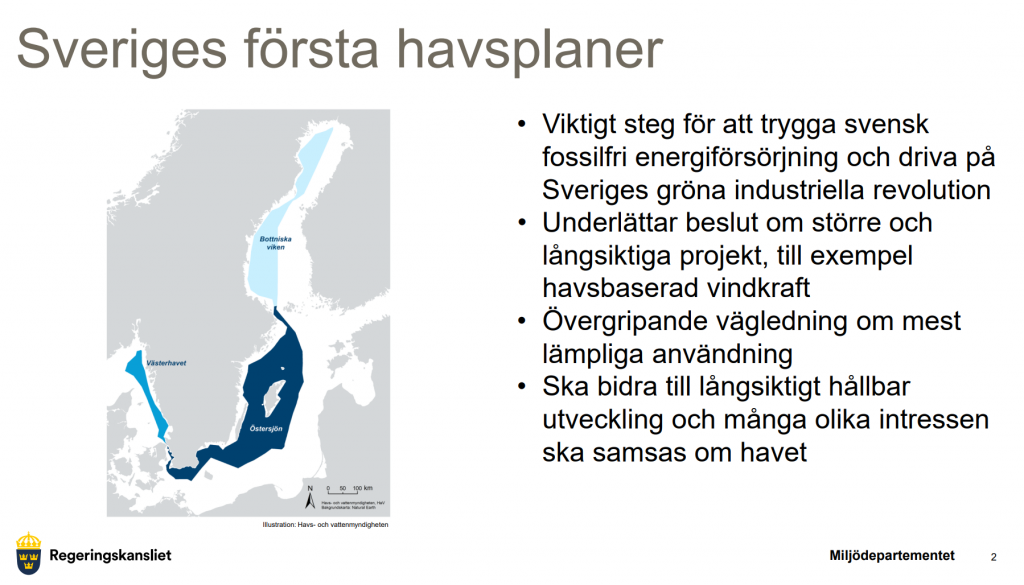 Slide with highlighted maritime areas for which marine plans will be developed | Source: Ministry of the Environment and Ministry of Infrastructure of Sweden

The three marine plans cover the Gulf of Bothnia, the Baltic Sea, and the West Sea. The plans provide guidance on how best to use the sea and how the various stakeholders can coexist. Marine plans identify areas for power transmission, energy production, defense, culture, nature, recreation, sand mining, shipping, commercial fishing, and general use.

Sweden’s electricity consumption is expected to increase significantly in the coming years as a result of the electrification of industry and transport, and the phasing out of fossil fuels.

– Today we identify areas where offshore wind can generate 20-30 TWh of energy per year. At the same time, we are taking further steps to enable total marine electricity generation of 120 TWh, i.e. almost as much as all of Sweden currently consumes in a year. We need a lot of cheap electricity fast,” pointed out Energy and Digitalization Minister Khashayar Farmanbar.