Budimex and EDF Renewables announce the signing of a Memorandum of Understanding (MoU) to partner on a 50/50 basis and to jointly commit to realizing investments in offshore wind farms as part of the second phase of offshore development in Poland.

As part of the second phase of offshore development, 11 new sites have been made available for the construction of offshore wind farms in the Polish part of the Baltic Sea. The capacity of the planned investments in the second phase is expected to reach 11 GW. Offshore development is one of the cornerstones of Poland’s energy transition.   Offshore wind farms are expected to provide a new energy source in our country and significantly reduce the share of coal in power generation. 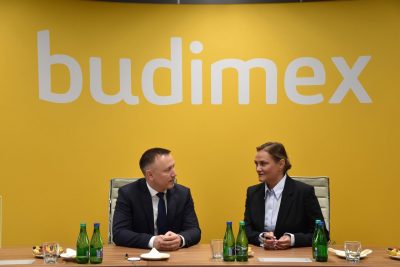 EDF Renewables has extensive experience in the RES area and notably in the design, preparation, financing, construction, and operation of renewable energy projects, including offshore wind energy. The company is also one of the leaders in the offshore industry.

Budimex, as the largest general contractor of infrastructure projects in Poland, will bring to the joint venture its extensive experience gained during the implementation of various investments in Poland, its extensive knowledge and experience in the development of RE assets worldwide through the capabilities gained out of the creation of the new energy infrastructures business unit in Ferrovial and a vast network of contractors, partners, and entities cooperating with the Budimex Group. Budimex wants to take an active part in the country’s energy transition and continue to expand its business profile with investments in RES.

– The energy transition is happening here and now. There is enormous potential in it, and we want to be an active player in the RES market. Our goal is for us to be energy self-sufficient by 2026. Thanks to the commitment of our teams and the introduction of innovative solutions, all energy can come from renewable sources – said Artur Popko, President of the Budimex Group.

Alicja Chilińska – Zawadzka, CEO of EDF Renewables in Poland, said: – EDF Renewables in Poland has been operating in Poland for over ten years and has a total portfolio of 800 MW of projects in operation and in development, and benefits from a solid network of local partners. The company is intensively involved in the energy transition in Poland. This agreement is another step showing the attention we pay to partnering with Polish stakeholders in realizing our projects and the chain of benefits of offshore investments. EDF Renewables also benefits from many years of experience in offshore wind energy, gained in Europe, China, and most recently in the United States.

– “We are happy to establish cooperation with an experienced Polish company, operating for 50 years on the domestic construction market and the largest general contractor of infrastructure projects in Poland. Combining the potential and experience of EDF Renewables Poland and Budimex is a guarantee of success in such demanding and complex projects as offshore investments.” – adds the CEO of EDF Renewables.

– “Our next planned activity is the organization of the Polish-French Offshore Day on September 13 in Gdansk. Pomeranian Offshore Platform is the organizing partner, while BalticWind.EU will be the media partner of the event. During the event, the French experience of implementing offshore projects and building an economic ecosystem that supports, and benefits from, investments in offshore wind energy will be presented. It will also be an excellent opportunity for Polish companies to establish business contacts with EDF Renewables and its global partners interested in building local content and investments in Poland.” – says Alicja Chilińska – Zawadzka.

The companies have committed to cooperate on an exclusive basis regarding investments in offshore wind farms in the Polish Baltic Sea, being open to a possible  extension of the cooperation to other entities if that could bring value to the partnership. The parties will aim to conclude a comprehensive agreement soon, which will form the basis for close cooperation in offshore wind energy investments.

Budimex Group is a Polish company with over 50 years of tradition, whose majority shareholder is the Ferrovial Group. The company is the largest national contractor of infrastructure projects, whose scope of work includes general contracting in the sectors of roads, railways, cubic structures, hydro-technical energy, industrial or military. In addition, its business profile includes service activities (waste management and road infrastructure) and investments in the renewable energy segment. Since 1995, Budimex shares have been listed on the Warsaw Stock Exchange.

EDF Renewables is an international leader in renewable energies, with net installed capacity of 10,1 GW (15.6 GW gross) worldwide. Its development is mainly focused on wind and solar photovoltaic power. EDF Renewables operates mostly in Europe and North America but is continuing to grow by moving into promising emerging regions such as Brazil, China, India, South Africa, Australia, and the Middle East. The company has strong positions in offshore wind power, but also in other areas of the renewable energies industry such as energy storage. EDF Renewables develops, builds, operates, and maintains renewable energies projects, both for itself and for third parties.

Pierre Tardieu: Finland is setting out a clear blueprint to go climate neutral by 2035