Wind project developer Svea Vind Offshore has announced that Gävle City Council has given the go-ahead for the Utposten 2 wind farm in the Baltic Sea.

As the announcement reads, on 22 November the Gävle City Council decided to approve the use of the Utposten 2 area for wind energy. This means that the five-year work to explore the area can now continue.

Offshore wind projects in the Swedish maritime territory require several permits. Relevant parties such as authorities and the general public have been consulted. The application with the environmental impact assessment according to Chapters 9 and 11 of the Swedish Environmental Code has been submitted for the decision to The Land and Environment Court (Mark- och miljödomstolar), which deals with issues relating to water permits and environmental permits.

We have described the Utposten 2 project onon the pages of BalticWind.EU. The offshore wind farm could start providing renewable electricity in just a few years. The SEK 8-9 billion development will be located just 15 kilometers from the mainland and 17 kilometers east of Axmar Bruk. The construction of 30-50 turbines to a height of up to 250-300 m is envisaged. 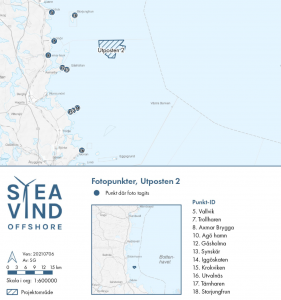 Work on the farm has been underway since 2016, and the first electricity couldbe operational as early as by 2025, provided that all the necessary permits are obtained. The offshore farm could increase the supply of renewable electricity by 1.8 TWh per year, equivalent to 40 percent of current electricity consumption in the region.

The Utposten 2 wind farm can make a significant contribution to the steel industry in a region that is facing increasing demand for renewable energy. The installation can simultaneously reduce carbon dioxide emissions by up to 1.3 million tons per year.