Paweł Wróbel: What are your top 3 key EU energy and climate achievements in 2021?

How would you justify such a choice?

The European Climate Law is a historic step on a global scale: it made the European Union the first of the world’s three largest greenhouse gases emitters to have the objective of climate neutrality enshrined in law. The same applies for the 2030 goal: a collective net CO2 emissions reduction target of at least 55% by 2030 compared to 1990 is now legally binding – full stop. It anchors the irreversibility of EU’s energy transition, while providing certainty and predictability so precious if we are keen on new, clean investments in the energy sector.

The “Fit for 55” Package is a kind of toolbox to implement EU’s 2030 climate goals on our way to net-zero in 2050. It is extremely complex – as much as 18 legislative proposals and several thousands of pages – and very far-reaching, including proposals on extending the scope of the EU ETS to transport and buildings, on establishing brand new Social Climate Fund, on measuring and reporting methane emissions or creating the EU Carbon Border Adjustment Mechanism (CBAM). This makes this Package unprecedented, even if it may not yet be an achievement in itself: the scale of the transformation it will bring about is simply stunning.

And here comes the Just Transition Fund, which is inevitable if we are serious about taking into account different starting points of all Member States and regions in this profound transformation of our economies, if we want it to be fair and inclusive process which leaves no one behind.  In other words: if this transition is to actually happen! This is why as early as in 2018 I proposed establishing such a Fund – and I am glad we succeed in creating it with a budget of 17,5 bln euro for the first period (2021-2027). In fact, we agreed it with the German EU Council Presidency already back in December 2020, but it was adopted only in May and enter into force on 1 July 2021. 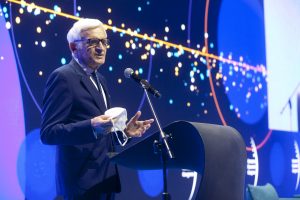 What will be the long-term effects of the COVID-19 on the EU energy transition?

This pandemic has bluntly reminded all of us how real and strong the interdependence between human and nature is; how fragile and disastrous is our sense of “being in control”; and how important it is to listen to scientists and experts. And they leave no illusion: the coronavirus could be just a bitter foretaste of what lies ahead if we do not face up to a more long-term threat: global warming. Hundreds of thousands of premature deaths annually due to air pollution and heat, fires and droughts, lack of drinking water in some and wild floods in other parts of the continent – this is at stake if we do not stop climate change. In addition, even though there is a vaccine for the COVID-19, there is no vaccine for global warming. The only possibility is prevention – and energy transition is the right answer.

How do you read it in the context of economic recession in the European Union resulting from the current pandemic?

Every crisis is at the same time a new beginning. We should use it as an opportunity to do things differently, better, and instead of going back to certain old ways choose solutions that will stimulate sustainable growth by taking full advantage of new technologies, digitalization and clean energy. This is the logic behind the newly established EU’s Recovery and Resilience Facility called “Next Generation EU”, with a budget of around 700 bln euro. At least 37% of this amount should be dedicated to climate and green transformation. It all means that not only our energy transition is required now by law, the European Climate Law, but that we have also secured huge amounts of money to accelerate these actions and investments.

Will the acceleration of transformation that we are witnessing not cause the disproportions between EU countries to become even greater than before? How to reconcile such diverse interests of Member States?

Interestingly, the disproportions between countries and regions were never a serious problem for the EU. On the contrary: these where traditionally areas where European integration, founded on a solidarity principle, delivered real added value and tangible results. Cohesion policy and funds are EU success stories.

The question now is how to translate it into realities of energy transformation. This is, for example, about the Social Climate Fund or Just Transition Fund, which I mentioned earlier and, more broadly, about the entire Just Transition Mechanism. However, the key issue is technological neutrality in planning and executing: to acknowledge significant differences in points of departure of Member States and regions, allowing them for individual paths which reflect national and local specificities, challenges and opportunities. We all want the EU to be “Fit for 55” – but it should by no means mean “one size fits all” approach.

What are your top 4-5 key energy transition topics we should expect in 2022?

2022 will be – in fact – the “year of delivery” of the European Green Deal with the ongoing works both on the “Fit for 55” and Gas Packages in the European Parliament and in the Council. Therefore, I expect a lot of heated debates on many important topics – which of them will be crucial? I would point out four of them: soaring energy prices, extension of the EU ETS to transport and buildings, the role of natural gas as a transition fuel and last but not least – hydrogen economy and its development in the EU.

What will be the biggest energy challenge in 2022 from the perspective of the European Parliament?

This can be put in four words: “Fit for 55” Package. How to find a compromise on these legislative proposals which will be accepted by majority but still perceived as ambitious – not only by minority? This is the question and perhaps the biggest challenge for the upcoming year. However, I am sure we will find a way in the European Parliament to address it.