Offshore wind energy is setting one of the key development directions in the energy sector. Poland should take advantage of the excellent conditions of the Baltic Sea for the development of OWF. This new branch of the economy will provide access to cheap, clean energy and strengthen the competitiveness of Polish companies. Floating offshore wind farms are a rapidly growing energy industry and a future direction for the RES sector – as states one of the conclusions of a study tour to Portugal on 22-23 August 2023, with the participation of Polish parliamentarians and media.

Estimates to date show that by 2050 the development potential of offshore wind farms in Poland is 28 GW. There is a new perspective and potential for investments ahead of Poland. It will require a high level of commitment from investors, the state and financial resources in order to be successfully implemented.

“Achieving the highest possible level of local content is a key challenge now. Poland can achieve this ambitious goal only with the help of adequate institutional and regulatory support, as well as properly planned and led multidirectional activities aimed at creating a favorable business environment for offshore development, characterized by attractive opportunities for new market participants. Now, the key is to work out amendments to the offshore law in parliament, which will make it possible to streamline the implementation of the first wind farm projects”, says Janusz Gajowiecki, President of the Polish Wind Energy Association.

A Polish delegation took part in a trip to Porto, during which Europe’s first floating offshore wind farm was presented. The WindFloat Atlantic (WFA) project was built with Ocean Winds, through Windplus S.A., responsible for the development, construction and ongoing operation of the project.

WindFloat Atlantic consists of three offshore turbines of 8.4 MW each (25 MW total). The farm is located 18 kilometers off the coast of Viana de Castelo, Portugal, where the ocean is about 100 meters deep. The WindFloat Atlantic farm was launched in 2018. Its working life is scheduled for 25 years. It produces 75 GWh of energy per year, making it capable of powering a city of 25,000 residents. It also means real savings in CO2 emissions.

“Ocean Winds is betting on innovation. Floating wind farms are a rapidly growing and competitive market. With the successful implementation of the WindFloat Atlantic project, we have shown that this innovative solution is a technology fully ready for large-scale commercialization. Ocean Winds already operates in seven markets around the world. The basic farm technology remain the so-called bottom fixed – an example is the BC-Wind project underway in Poland. Nevertheless we continue to invest in floating wind farms. ScotWind Leasing recently announced the outcome of a settlement round in Scotland, awarding Ocean Winds two sites for two floating offshore wind farms: a 1.8 GW project with partner Mainstream Renewable Power and a 500 MW project east of the Shetland Islands”, indicated Dan Finch, Managing Director of Ocean Winds UK.

For Poland, offshore wind energy is an indispensable tool for transformation. Offshore wind farms are highly efficient and in today’s conditions they are also a tool to become independent of fossil fuels, including those imported from the East. At the same time, WFs, like other RES, are a cost-competitive compared to other energy sources. Cheaper, CO2-free electricity is needed today by the entire national economy, but also by domestic industry. 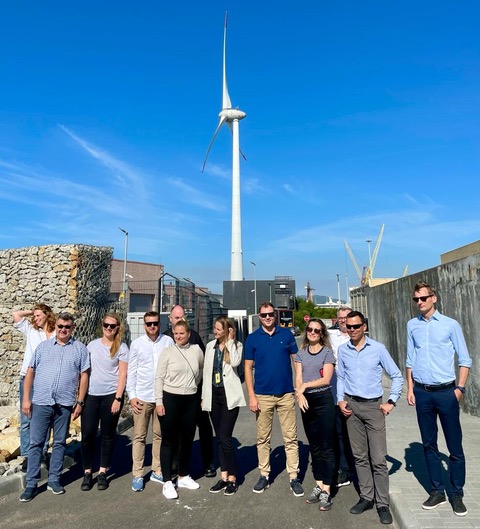 The wind industry has a turnover close to 60 billion euros a year, 65% of which feeds into the EU economy. This means that for every €1,000 in revenue, €650 stays in the EU and contributes to GDP growth. By 2030, wind energy can create about 450,000 new jobs, of which 250,000 in the onshore wind power sector, and approx. 200,000 in the offshore wind energy sector. Poland could have a large share in these benefits. In this process, cooperation with multinationals may be important. With their vast knowledge and experience in the implementation of offshore wind farms around the world, they can help Polish investors take advantage of the huge potential of offshore wind energy. In addition, such cooperation is an opportunity to lower the CAPEX of new projects in Poland. Knowledge from more mature markets shows that forming effective alliances with experienced foreign partners will help build a strong offshore wind sector in Poland in a cost-optimized way and in support of the domestic industry. In this context, it should be borne in mind that foreign entities carrying out such projects have had extensive supply chains for many years – through cooperation, Polish entities will gain access to these supply chains and thus to foreign markets.

The Baltic Sea has some of the best conditions for developing wind farm investments. Our sea has very good wind and location conditions, as well as shallow waters (the Baltic is the shallowest sea in the world, its average depth is about 55m). All this means that the potential for offshore wind energy development in the Polish part of the Baltic Sea is considered one of the largest in the region.