Baltic Windustry: business and science coming together to build offshore in Poland

Opportunities and benefits of cooperation between universities and the offshore wind industry was the main theme of the Baltic Windustry Conference, which was held on 8 September 2022 in Gdansk, Poland. The main focus of the meeting organized by the Offshore Wind Energy Center of Gdańsk University of Technology and the Polish Wind Energy Association was cooperation between universities and business.

The program of the conference was prepared to show how cooperation between business/industry and academia/research generates concrete solutions developed directly to meet the needs of the wind energy industry, said Marcin Łuczak, Director of the Offshore Wind Energy Center at Gdańsk University of Technology. Conference participants also discussed how to significantly reduce costs, implement modern digital technologies and benefit from it.

Monika Morawiecka, Senior Advisor at the Regulatory Assistance Project, highlighted the fundamental challenges of Polish industrial and research organizations in the areas of personnel training, education and innovation.

Cooperation on common challenges, as well as sharing risks and competencies, with academia and research institutes is key. For example, we have experience with EU projects such as MARE-WINT where we work on new offshore turbine technology, or Zephyr, which is an efficient exploitation of onshore and urban wind sources, as well as with international projects such as German-Danish projects, said Herman Van der Auweraer, Director Global RTD at Siemens Digital Industries Software.

Many of the business representatives pointed out ambitious plans for a zero-carbon transformation during their speeches. – Orlen Group wants to achieve climate neutrality by 2050 and reduce CO2 emissions by 20 percent by 2030 – Maciej Tomecki, Project Manager at PKN ORLEN emphasized in his speech. – We have high aspirations related to the offshore sector. We want to work closely with universities to develop technologies in this industry, Tomecki said.

Also, in behind-the-scenes conversations with BalticWind.eu, participants stressed how important it is to strengthen relations and dialogue between business and academia in light of the rapid development of offshore wind energy in Poland.

Industry representatives agreed that identifying technical needs and problems, as well as taking into account economic, social, cultural and geographic conditions, is the first step in the necessary cooperation between universities and the offshore wind sector. Achieving synergies in this regard is not easy, but nevertheless crucial for the further development of offshore wind energy. Research, technological support and properly educated personnel is the role of universities, without which it is difficult to develop in any field.

By sharing their research, universities can provide answers to issues that industry alone would never come up with. It’s not just about new solutions and technologies, but also about academic staff inspiring students to tie their future to this industry, said Herman Van der Auweraer, Director Global RTD at Siemens Digital Industries Software. 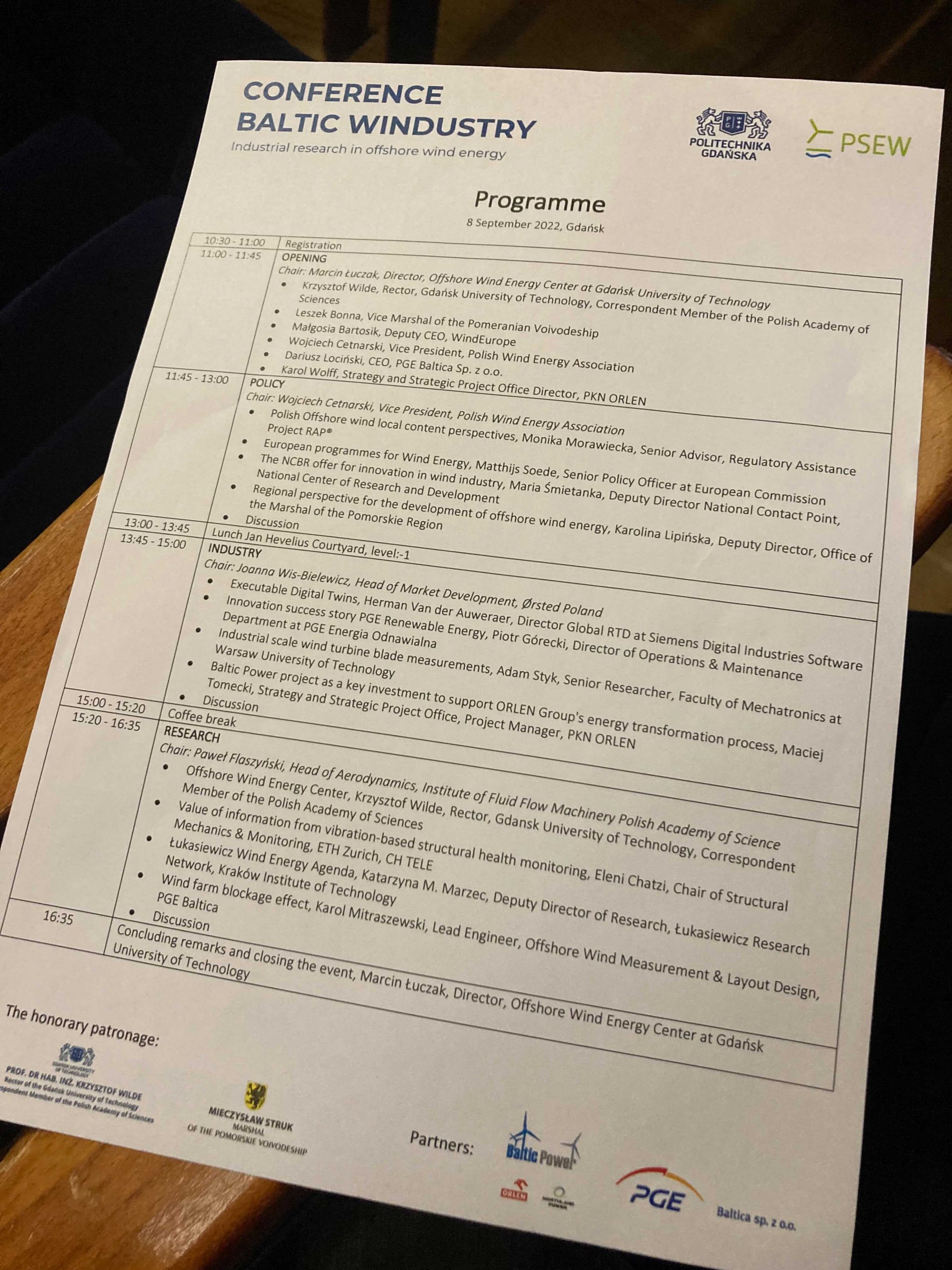 The conference program was divided into three blocks: research, industry and funding measures. During the first two, specific solutions to existing offshore wind energy problems, and ways to make money from it, were sought. During the third block, possible sources of funding at the regional, national and European levels were analyzed.

Behind the scenes, participants stressed that without the implementation of offshore wind energy, it will not be possible to effectively achieve the European Green Deal goal of climate neutrality by 2050, nor to fulfill the goals of the Paris Agreement.

In light of REPowerEU, the EU plans to deploy 480 GW from wind by 2030. It’s a huge amount of capacity, and offshore plays an important role. According to WindEurope, Europe could get up to 160 GW from offshore wind by 2030. In this context, conference participants pointed to the importance of the recently announced Baltic Declaration, which was signed by 8 Baltic countries. The declaration commits to increasing the capacity and expansion of offshore wind farms in the Baltic. This offers great opportunities for additional employment.

The wind industry is Europe’s leading industry, with 250 factories spread across the continent. It already employs 300,000 people, and this number is expected to grow to 450,000 by 2030. By then, the offshore wind sector alone could employ 200,000 Europeans, Małgosia Bartosik, deputy CEO of the European wind energy association WindEurope, said in her speech. 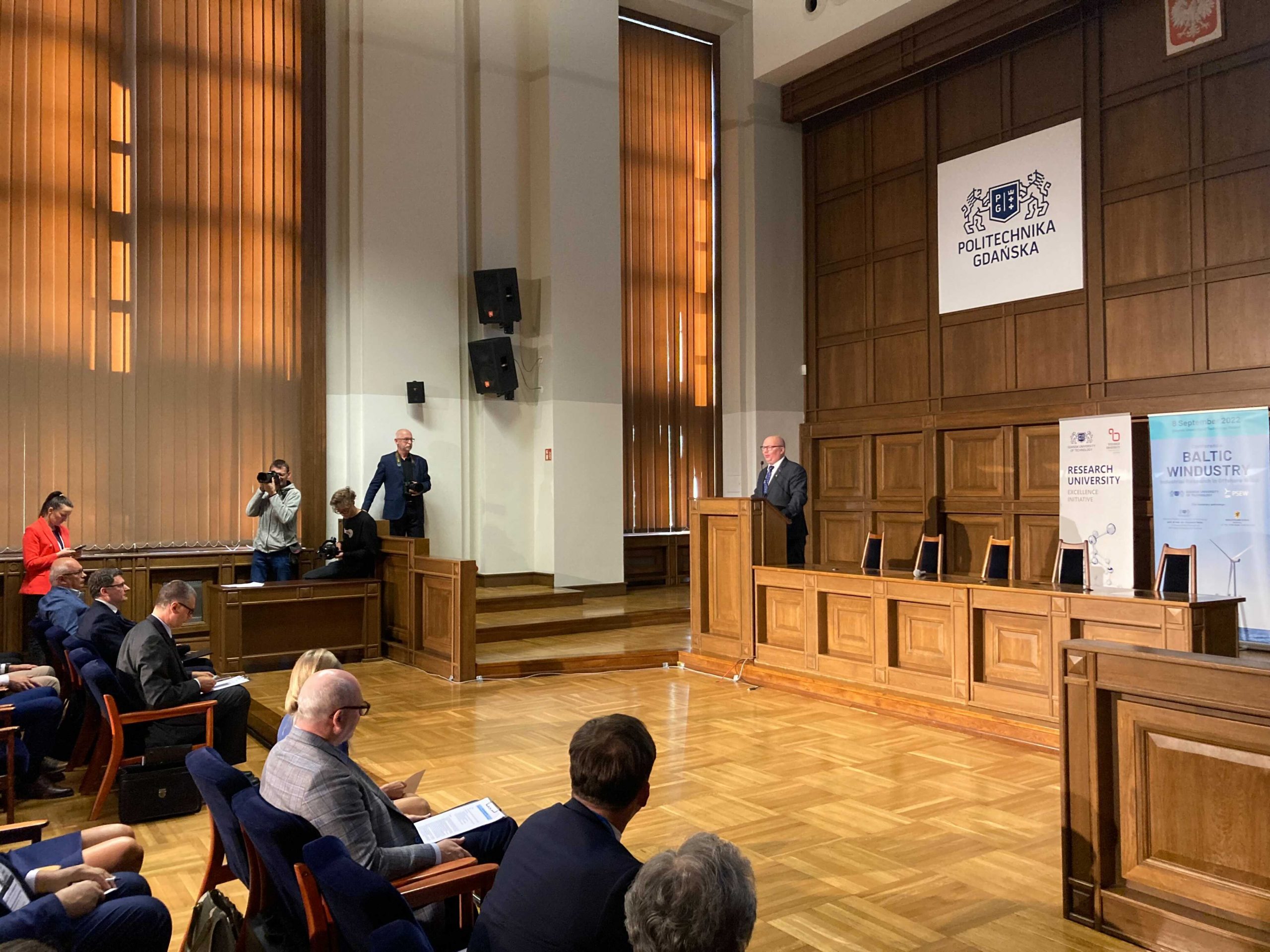 She also stressed that the energy crisis currently facing Europe and the world could be an opportunity for change and development. She recalled that the great oil crisis in the 1970s initiated changes in the perception of energy and drew attention to renewable energy sources. At that time, Denmark was the first to start obtaining energy from wind, which today accounts for 45 percent of the country’s electricity. By comparison, in Poland it is only 9 percent, and the EU average is 15 percent.

Until now, in Poland, unlike in many other EU member states, there has been no dedicated platform for discussion between academia and industry. The Baltic Windustry Conference fills this gap by focusing on engineering, as well as technical and technological issues of wind power generation. The topic is all the more relevant because, in the era of the energy crisis related to the war in Ukraine and increasingly difficult access to raw materials, offshore wind energy appears to be the key to solving the energy shortage.

Baltic Windustry, as planned by the organizers, will be a cyclical event. Subsequent editions are to be expanded to include submitted proposals for speeches in order to create the opportunity to present research and analysis results available to a wider range of participants.

Following suit, the Offshore Wind Energy Center at Gdańsk University of Technology, the Faculty of Mechanical Engineering and Ship Technology, Pomeranian Employers and the Careers Office of Gdańsk University of Technology are organizing the first edition of the Offshore Career Day on October 26. The event is aimed primarily at students and graduates, but also high school students who associate their future precisely with this industry.

Posted by
Justyna Koć
This author has not yet filled in any details.
So far the author has created 12 blog entries.